The wetlands area of Roxhill Park is one of the most biologically diverse ecology zones within the Seattle City limits?

Learn more about the importance, history, challenges and steps being taken by the Roxhill Bog Committee.

1. Why is Roxhill Bog so important?

As the drainage basin for sixty surrounding acres, Roxhill Bog collects sediments and pollutants from rain and storm water run off. Plants absorb some pollutants while the spongy peat soil helps filter sediments. At the headwaters of Longfellow Creek, this wetland acts as an essential water filter for a 3.5-mile long waterway that’s home to coho salmon, ensatina salamanders, and red foxes feeding downstream. The creek drains a 2000-acre watershed and is one of the few year round free-flowing creeks in Seattle.

— Nature in the City Seattle, by Kathryn True and Marie Dolan, Mountaineers Books; May 1, 2003

2. What’s wrong with the bog today?

3. What is happening to fix this?

We’re currently researching this issue with Seattle City Parks, and are digging into records and the history of the project with them, Seattle Public Utilities, and King County.

Several solutions are possible including some sort of coffer dam between the bog and the storm drains, changes in surrounding vegetation and additional sources of water. Once all information is available and we have a completed history of all events and work done to the Roxhill Bog, we will be able to coordinate a proposal for the following four steps:

4. The history of Roxhill Park’s bog

Westwood and Roxhill, 1953. The park, Westwood Village, and the school areas are all farms and wetlands, still.

For an idea of how old Roxhill Bog is, this Wikipedia article details the state of the world at it’s inception.

1930s: There were productive farms and a dairy on the Roxhill Park land just north of SW Roxbury Street, where today’s baseball fields are. Children played in a large pond north of that in the summer and ice skated on it in the winter. The area was owned by the Kodama family, Japanese farmers forced to relocate to internment camps during World War II. Source: 4

1960: City receives some of the Roxhill Park land as a donation.  Source: 1

1965: Westwood Village shopping center is finished by the Skinner Corporation and opens. Source: 4

1966: Main storm water line to the north was built. Dates of side lines would require a trip to the City’s document center.  Source: E-mail from SPU

1999: Neighborhood residents and other stakeholders begin planning with Parks. Starflower and 14 other organizations pledge support.  Source: 1

2013: The collar on an overflow pipe at the north end of cell 4 has long been too low, causing water that should flow to the northern 3 peat cells to flow into storm drains. During the summer of 2013 the collar height was corrected.  Source: Phil Renfrow, Seattle Parks

A system map of Roxhill Park’s bog cells, numbered 1-4. The cells are the roughly rectangular areas surrounded by trails on this map, toward the right hand side. The top of the map is north at SW Barton Street. Just off of the top of this map would be the Westwood Village Shopping Center. Just off of the bottom of this map is SW Roxbury Street.

This image from the Roxhill Stewardship report, showing the same area but from the east, may help you to understand which cells are which: 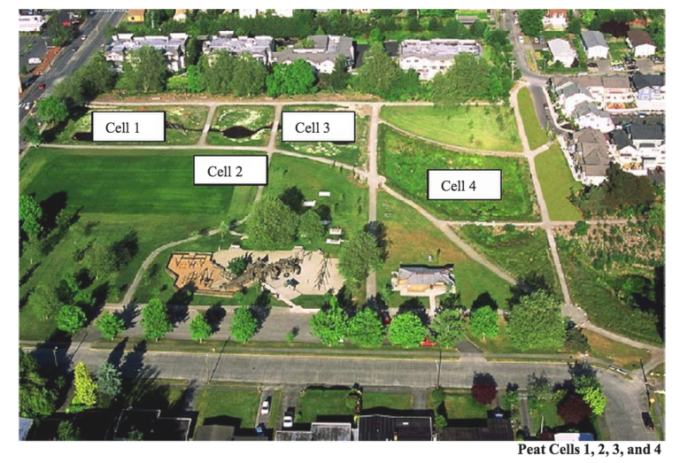 The area where it says “Abandonded Laterals” is cell #1, with cell #2 below that, then cell #3, then cell #4, which is largest, and turns toward the left side of the map.

System map of all the nearby storm and waste water drainage systems near Roxhill Park.

Roxhill Park Hydrologic Investigation and Recommendations Report
A study of the peatland hydrology done by King County Department of Natural Resources. Recommends further study of hydrology, development of water flow model and design of facility to control water. The report’s date is March 2000.

The Roxhill Bog Committee’s long term goals are to  protect the headwaters of Longfellow Creek in West Seattle and to safely repair the Roxhill Bog to it’s original wetland state, without harm to the park’s neighbors.

If you have or know of any information related to this work in progress, please e-mail any details you know to info@roxhillpark.org. If you would like to discuss this at one of our meetings or have materials that you would like to share in person, we also meet monthly for our regular Roxhill Park Champions as posted on this website.

2615 SW Barton St 98126
We meet the 2nd & 4th Weds of the month. Check our 'Upcoming Events' list below to confirm date, time and meeting location. These meetings are open to everyone. Go to 'Contact Us' to get in the loop to join us.